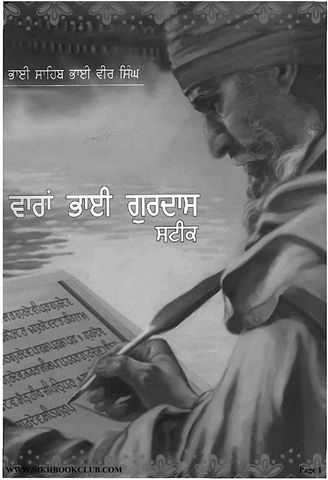 In this book, Giani Hazara Singh and Bhai Vir Singh combine their initiatives to make Bhai Gurdas Ji’s Vaaran understandable to the readers again. Though written for its time in colloquial Punjabi by Bhai Gurdas, some of the words became obsolete with the evolution of Punjabi. This book was an attempt by these two great theologians of Punjabi literature to fill up. ‘Vaaran Bhai Gurdas Ji’ was first published in 1911. This is its 19th edition, which was published in 2007.

Vaar literally means ballads in terms of poetry, and the Bani is organized in the form of 40 chapters. Vaaran Bhai Gurdas contains the entire life elixir of Guru Granth Sahib, gaining for itself the the synonym of being a Key or a Guide to Guru Granth Sahib for the uninitiated ones by Guru Arjan Dev himself. Further, the chapters are again segregated in sections (Pauris), which help simplify the meanings of essential Sikh principles, as enshrined in Guru Granth Sahib.

Though renowned more for his masterful interpretation of Gurbani and Sikh literature, Bhai Gurdas’s linguistic credentials were of great account. He possessed knowledge of Sankrit, Persian and Braj Bhasha, apart from Punjabi. His deep understanding of Gurbani was admired by Guru Arjan Dev himself, who used his trusted services as a scribe while compiling the Adi Granth. He wrote tediously under the dictation of Guru Arjan Dev for 19 years. That remains Bhai Gurdas’s greatest contribution to Sikh Literature. Apart from this, he also supervised some other scribes like, Bhai Sant Das, Bhai Sukha, Bhai Manasa Ram, and Bhai Haria, thus enriching many other Sikh Scriptures through them.

His gift of expression as a poet was immense, which reflects in all his creations including Kabit Sawaiyye, but Vaaran Bhai Gurdas are still regarded as his most famous compositions. In the words of Bhai Kahan Singh Nabha, “...this Bani presents a form of exegesis of Gurbani.”