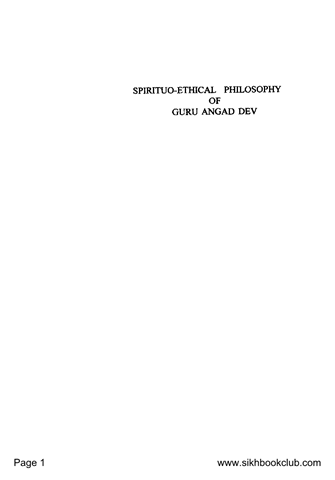 Guru Angad Dev, earlier known as Bhai Lahina, remained in the company ofGuru Nanak for about seveneight years and proved himself, the most obedient, humble and self-abnegating person who ultimately merged his total self in the self of Guru Nanak.

Bhai Jodh Singh was patriarchal Figure for many years in the fields of Sikh theology, education and politics. Besides his books, both in English and Punjabi, he contributed essays on Sikhism to several learned publications and reference works, including the Encyclopaedia Britannica. Among his more famous works in Punjabi are Sikkhi ki Hai? (1911), Guru Sahib ate Ved (1911), mdJapuji Sahib, Bhagat Bdm Satik (1913), Gumiat Nimay (1932), Prdchin Birdn Bare Bhulldn di Sodhan (1947), and Sri Karldrpun Bir de Darshan (1968); in English, Japji (1918), Life of Sri Guru Amardas Ji (1921), 33 Savaiyas (1953), Some Studies in Sikhism (1953), Gospel of Guru Nanak in His Own Words (1969) and Kabir (1971).