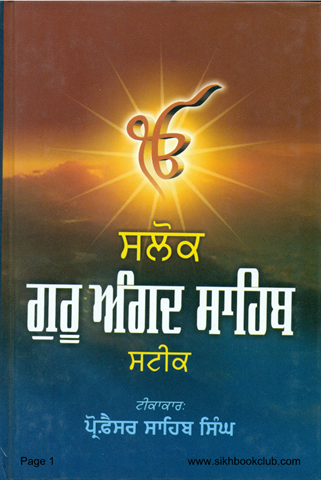 Slok Sri Guru Angad Sahib Steek was the first initiative by Prof Sahib Singh of publishing an entire body of work of a Guru Sahib in a cumulative form. The reason seems obvious, as Guru Angad Dev ji has only written a total of 63 Sloks (verses), as compared to the Bani of other Guru Sahibs. Though small in numbers, Guru Angad Dev Ji’s sloks contain a sea of spiritual teachings to guide the followers towards a life of piety.

Interpretations to these Sloks were initially published in Prof Sahib Singh’s cumulative work on the 22 Vaar inscribed in Guru Granth Sahib, but later, a separate ‘Slok Sri Guru Angad Sahib Steek’ was envisioned and published in 1948, at the behest of Prof Singh’s publishers. This new approach allowed Prof Sahib Singh to elaborate on his understanding of the central philosophical bent of Guru Angad Dev, in totality. Read on.