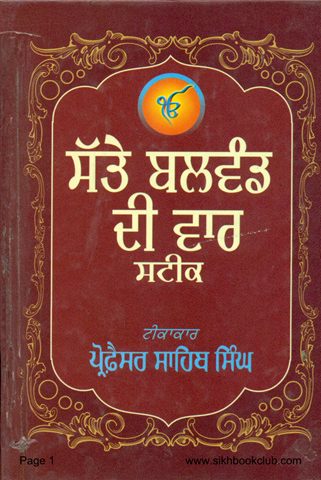 Part of a work which started in 1920’s, Prof. Sahib Singh managed to finish writing interpretations of all 22 Vaar inscribed in Guru Granth Sahib only in the 1940s. Satte Balwand Di Vaar is part of older Punjabi literary traditions of singing illustrations of valorous warriors in battlefield. The word ‘Vaar’ signifies this style of verse writing, and has been borrowed from Sanskrit in its form.

Published in 1949, Satte Balwand Di Vaar Steek is a link in Prof Sahib Singh’s work not only as an interpreter, but also as a historian and explorer, wherein he tries to establish the said Bani as authentic, and part of Guru Granth Sahib, offsetting propaganda by certain followers proclaiming some such works as against the principles of Sikhism.