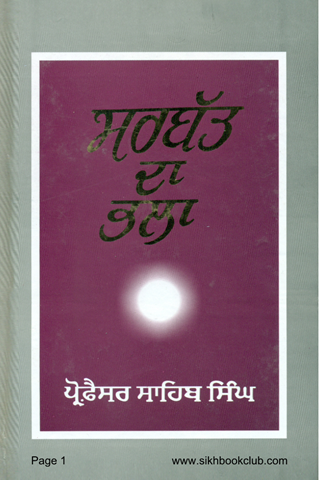 Published in 1951, ‘Sarbat Da Bhala’ is Prof Sahib Singh’s fourth collection of religious essays after ‘Burai Da Taakra’, Gurbani Ate Itihas Bare’ and ‘Gurmat Prakash’. Initially planning to publish ‘Bhagat Bani Steek’ in 1950, Prof Singh’s plans were halted because of partition and the subsequent political and economic situation prevalent in the country at that time.

Refusing to be dissuaded by financial constraints to further his writing endeavors, Prof Sahib Singh came up with this collection to keep his pen from drying, much to the merriment of his ardent readers. Like most of his spiritual religious essays, Prof Singh shows a path of moral upliftment, and religious tranquility through his deeply nourishing essays in ‘Sarbat Da Bhala’.