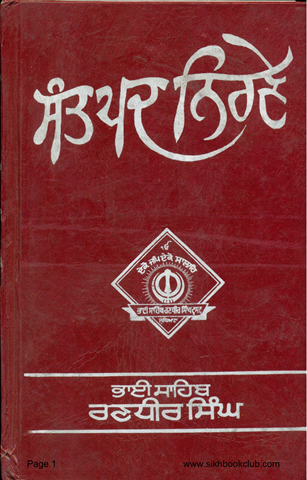 Bhai Sahib Randhir Singh Ji was a freedom fighter, reformer, theologian and the First Prisoner of Gurdwara Reform Movement. Bhai Randhir Singh’s original name before baptism and initiation according to what is written in Khalsa fold was Basant Singh. He was born in the village of Narangwal in the Ludhiana District of Punjab on July 7, 1878, to a family of a very noble and devout heritage. His father, S. Natha Singh, was a learned scholar of Punjabi, Urdu, Persian and English. Most of his early schooling was done in Nabha and his higher education at the prestigious Government and Foreman Christian Colleges in Lahore (in 1896-1900 A.D.), which was, at that time, the capital of the undivided Punjab State. For more than fifteen years (May 1915 to October 1930) Bhai Sahib Randhir Singh Ji was imprisoned for his involvement in the Ghadar movement, a revolt for freedom. On his release he won great accolades and honors in the form of HukamNamas by Akal Takhats (who take Decision for Sikhs). He wrote about two dozen books on Sikh theology, philosophy and the true Sikh way of life like in Astak Te Nastak, Andithi Duniya, Charan Kamal Ki Mouj etc.. Among all these books the most well known is his autobiography, a collection of his letters written from prison during his sixteen years of imprisonment. All the books reveal his personal spiritual experiences of the highest state of divine illumination.