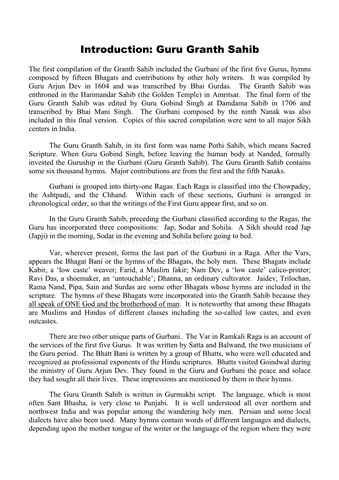 Introduction to the Guru Granth Sahib

Bhai Gurdas Ji Was much honoured in Sikh learning and piety, was a leading figure in early Sikhism.He was one of the most influential Sikh religious figures, having been a writer, historian and preacher while being a companion of four of the Sikh Gurus . He was the original scribe of the Guru Granth Sahib. He completed the Adi Granth in 1604. It took him nearly 19 years to complete this task. Bhai Gurdas not only wrote the Adi Granth as dictated by Guru Arjan but also supervised four other scribes, Bhai Haria, Bhai Sant Das, Bhai Sukha and Bhai Manasa Ram, in the writing of various scriptures. His other works in Punjabi are collectively called Varan Bhai Gurdas.