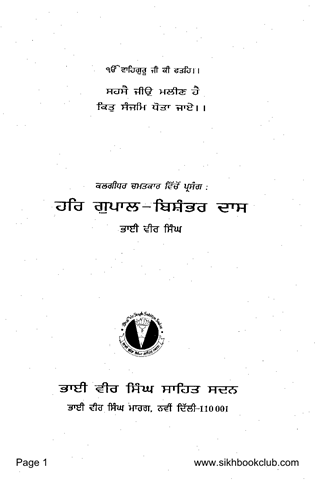 Extracted from the 2nd Volume of ‘Sri Kalgidhar Chamatkar’ which itself was a collection of short essays by Bhai Vir Singh elucidating Guru Gobind Singh’s teachings, ‘Har Gopal Bishambhar Das’ was first published in the form of a tract in 1936. Keeping the form simple in accordance to the needs of a tract, the play is largely bracketed as a dual of questions and answers between a father and a son.

Bishambar Das, a wealthy trader and a devout follower of Guru Gobind Singh, got worried about his son, Har Gopal’s tilt towards a Vaishnav saint, who he thought wasn’t wise enough to bring his son on the true path of piety. The concerned father advised Har Gopal to seek the blessings of Guru Gobind Singh, thus setting him on a coming of age journey toward spiritual awakening.

Seeing the opulence and the grandeur of Guru Gobind Singh’s abode, Har Gopal initially became skeptical of the Guru’s authenticity as a ‘Godly’ man. He could not understand why a Saint needs an army to fight battles, or palace to live in! Har Gopal thus comes to represent a man of this materialistic world, lost in a maze of fuzzy concepts of religion and spirituality taught by innumerous self-appointed ‘God-Men’.

Masterfully crafted by Bhai Vir Singh, this play is a great remark in times like these, where choosing a truly righteous Guru and guide becomes of paramount importance. The battles between ‘Himsa-Ahimsa’, ‘opulence and renunciation’ get settled, and the readers find their notions of what comprises of godly virtues being challenged, as Guru Gobind Singh goes on trashing one religious dogma after another with a smile. A must read for the progressive thinkers. Savor it at sikhbookclub.com