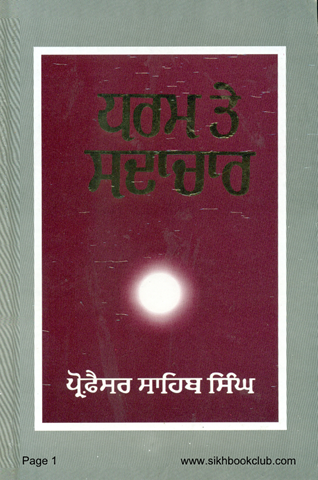 Published in 1951, ‘Dharam Te Sadachar’ is a collection of essays published independently over a period of 30 years between 1921 and 1951. Inspired by Leo Tolstoy’s ‘Religion and Morality’, Prof Sahib Singh translated his essay for Punjabi readers in 1921, which adorns the current collection in the form of its fourth essay, ‘Dharam Te Sadachar’, thus giving the book its title.

After years of writing interpretations of Guru Granth Sahib’s text, Prof Sahib Singh thought it incumbent upon him to write essays in the later part of his writing career which would lead to moral upliftment and reinvigoration of the Sikhs. He believed that religion is not only to be confined within the walls of Temples, or Gurdwaras, but something which seeks a presence in day-to-day practice. This book was directed towards this thought.