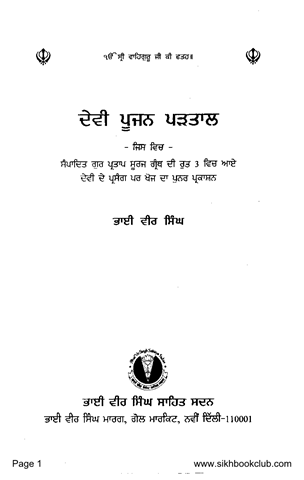 Extracted from Volume 3rd of Bhai Vir Singh’s epic Gur Pratap Suraj Granth, ‘Devi Pujan Padtaal’ is an investigative and exploratory study of the tradition of Goddess-worship in Hindu Mythology. Pushed by the rising clamor among certain Sikh scholars about Guru Gobind Singh allegedly being a devotee of Devi Chandi/Durga, Bhai Sahib published the study in 1932, primarily with the aim of repudiating the claims of certain skeptics of Guru Gobind Singh’s credentials as a follower of ‘Nirgun’ avatar, or the formless being, a tenet so pivotal to Sikhism.

Divided into three units, the first one explores the origins of Devi Pujan- (Goddess worship) in the Hindu mythology, which he sees was merely as an outcome of its times. The study claims that historically, the brave and valorous women fighters acquired the status of a goddess in various cults after they annihilated evil aggressors, epitomized as ‘Rakshasa’ or ‘Asura’, a remark on the times wherein struggle between the indigenous people of India, and the arriving foreign armies and rulers was a common reality. Mainly focusing on the valorous, warrior avatars of Devi like Kali, Chandi, Chandika, Bhairavi, Bhawani, Durga, Bhai Vir Singh concluded Devi to be a ‘Sargun’ avatar (Human form) of the ‘nirgun’ (the Formless, the True Lord), who is designated as the protector of the world in times of moral and religious degeneration.

In the second unit, Bhai Sahib goes on to explain the essence of the Gurmat thought, as pitted against any form of ‘Murti-Pujan’. Gurmat, he says, does away with the segregated form of the Lord as creator, maintainer, and the protector/destroyer of evil into an all powerful One , believing in his Indivisible form. All the forms are contained within the formless Supreme Being.

It is through the establishment of this background that he takes the exploratory dive into the case of Guru Gobind Singh being a believer of Durga in the last segment, by historically evaluating all the evidences in the context of the times they were written in. An interesting read!