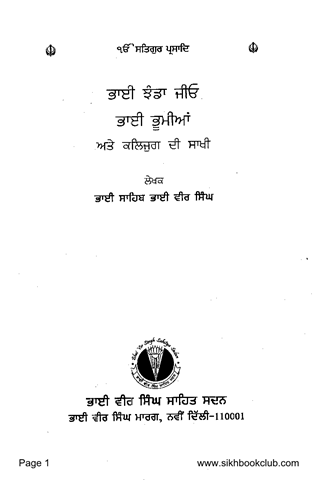 Bhai Jhanda Jio, Bhai Bhoomiya ji & Kaljug Di Sakhi was authored by Bhai Vir Singh in 1933 and 1936. Bhai Jhanda and Bhai Bhoomiya is a biography related to Guru Nanak Dev Ji when he undertook long journeys to teach the people the right way to live life and to achieve oneness with god. When Guru Nanak Dev was in Bisar country, no one would allow him shelter in his or her house, then Bhai Jhanda Ji, the carpenter appeared and took both Guruji to his house. He was very much absorbed in God’s Love. Guru ji much pleased with Bhai Jhanda Ji, taught right ways of worship and was given charge of (Manji). The word Manji refers to the low height wooden cots which the Sikhs would sit on and teach doctrines and principle to their people and sing hymns.

Guruji also met Bhai Bhoomiya Ji who was a landlord and lived in a village near Dacca where he was a rich farmer. He led a gang of thief’s. He had a firm belief that the evil deeds could be countermined by good ones so he ran a free kitchen round the clock. He made an announcement that, “Whenever any “Sadhu” or a holy men comes to the village he should be sent to his house. Bhai Bhoomiya heard about holy men coming to his village, he invited Guru Nanak Dev Ji and offered food. When Guru Ji asked what do you do ? He said, “ I earn black and dirty money”, to which Guru Ji replied, “If your earning is not good then how can your food fit to be eaten by a holy man?” Guru Ji further said, “A whole seed when sown in the ground, can produce a plant but a seed which has been split cannot”. This influenced Bhai Boomiya Ji to leave his inhuman job.

‘Kaljug wali Janam Sakhi’ or ‘Kalyug Di Sakhi’ is about Guru Ji and Kaljug. He had the form of a demon with scary eyes. One day Kaljug met Guru Nanak Dev ji.. Then Guru Ji started a hymn song of ‘Rag Maru’ which led to the transformation of Kaljug into a human. Kaljug fell down at Guru ji’s feet and said please forgive me for all my evil deeds. This e-book therefore depicts the influence of Guru Nanak Dev Ji on lives of Bhai Jhanda Jio, Bhai Bhoomiya Ji & Kaljug Di Sakhi.