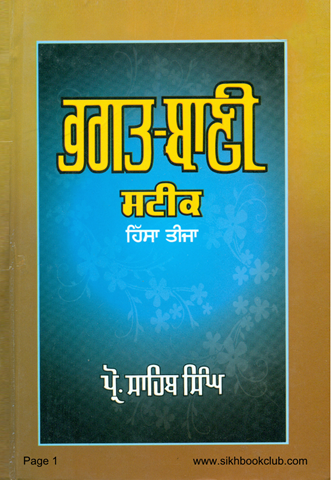 Compiled by Prof. Sahib Singh after several years of consuming work, Bhagat Bani Steek is a 5 volume series containing interpretations of the hymns of Guru’s followers. Apart from the hymns of six Gurus, Adi Granth contains the Bani (hymns) of 13 Bhagat (followers), which are grouped together in Guru Granth Sahib. Published in 1959, the third installment in the series focuses primarily on the Bani of Bhagat Namdev.

Starting off with a life history of Bhagat Namdev, the book goes on to explore the deeper meanings of his verses and interpret in an easily understandable manner for the readers. Bhagat ji’s Bani sings of the yearning for the True Lord, while showing a disenchantment with the prevalent form of practiced religion in the society.