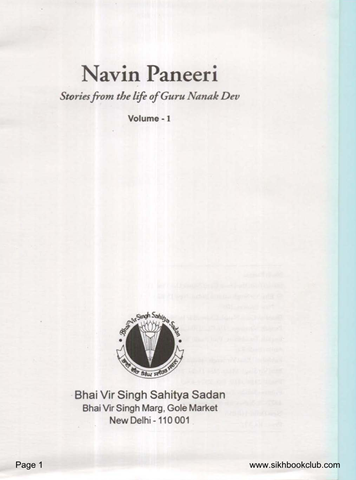 'Naveen Paneeri: Guru Nanak Devji'is a pictorial presentation of various significant life episodes of the first Guru, reverend Guru Nanak Devji in the form of a book and now available to internet users in the form of a compilation into an e-book. The book went for publication after the diligent work done by Bhai Vir Singhji which was based on his prior work and writing as in ‘Guru Nanak Chamatkar’. The English translations are done by Prof. Surjit Singh Chawla.

Guru Nanak Devji was born in 1469 AD in town Rai Bhoi’s Talwandi to mother Tripta and Mehta Kalu Ram. The house of Mehta Kalu Ram which is also the birthplace of the Guru was later and till today has been maintained as  a Gurudwara came to be known as ‘Gurdwara Janam Sthan’ and now as the most famous and pious ‘Nankana Sahib’. Guru’s Nanak Dev’s childhood was known as one which was witness to many miracles performed by the Guru even at his tender age.

The Guru as a newborn child had a radiance on his face and whosoever came to see the child felt happy and rejuvenated. Unlike other newborns Nanak Devji arrived in the world with a smile on his face. He was very different from the other babies of his age. When Pandit Har Dayal came to cast the newborn’s horoscope he was amazed by looking at the position of the stars and vital statistics of the baby. The Pundit acclaimed “This child is not an ordinary child but is a godsend of this earth, a messenger of the Almighty to show the path of holiness. The pundit even bowed down and saluted the child.

The book contains several such surprises for the readers who go through the other chapters depicting different phases of Guru Nanak Dev’s life. The Guru led a charming childhood, astonishing people with his knowledgeable talks. He knew many things that children of his age didn’t know. He could read Persian on the very first day of his class with his Persian mentor. He was therefore referred to as the Very Light of God. These and several other topics take us deep within the spiritual life of Guru Nanak Devji.